During the spring term of 2015, three students Marcela Fitzpatrick, Jacob Torres and Matthew Murphy studied M. ruber proBA operon expression using a dated site-directed mutagenesis kit from Strategene (originally purchased in 2005!!).  We inserted an  E. coli ribosome binding site (RBS) in the intergenic region between the proB and proA genes of an M. ruber proBA clone (vector was the pKt-1 plasmid - provided by the GENI-Science). Our reasoning was that the E. coli proBA operon has a RBS in this region, so maybe it will help expression of the proA gene in our clone when we transformed it into an E. coli proB or proA null strain as part of a complementation assay.

In an E. coli proA null background, both the positive controls (E. coli proBA and M. ruber proBA) and the experimental (M. ruber proBA with new RBS) complemented (see figure below).  Growth was slow for both M. ruber clones, however.  This is contrary to our observations from the winter term Molecular Genetics course, which saw no growth for the non-mutated M. ruber proBA clone.  It's clear, however, that the new RBS did not give the mutated clone an advantage under these conditions. 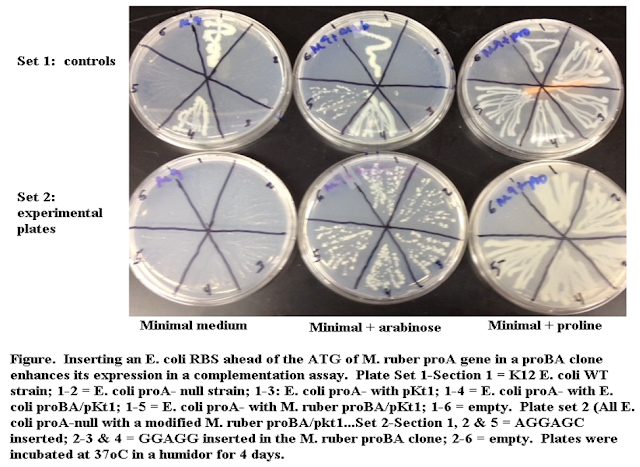 In an E. coli proB null background, very little complementation of either M. ruber clone was observed (see image below). 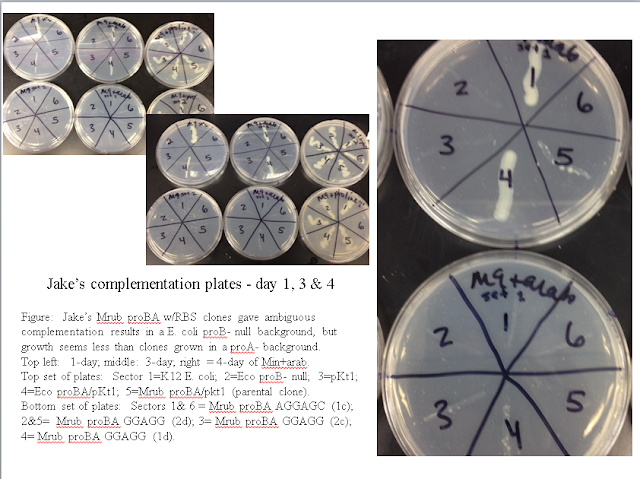 We successfully inserted two different RBS sequences (as confirmed by sequencing), but maybe we don't have the right sequence. The next step is to try a third RBS sequence.  I'm still thinking about why we see different complementation results for the E. coli proB vs. proA null strain. As described in earlier videos, proB and proA form a multi-protein complex that is required for proB function but not required for proA function.

Proline biosynthesis in M. ruber: work done during the winter and spring of 2015

This is the first of a three-part video series.  It was made in May of 2015 and it represents the work of my BIOL375/Molecular Genetics class  and several students working in my lab at Augustana College.  In this video, I describe how we arrived at the prediction that M. ruber follows the usual sequence in synthesizing the amino acid proline from glutamate. We use the bioinformatics programs and online lab manual associated with GENI-ACT (an NSF-funded project).